It’s a sunny day but my head feels cloudy. As I sit in my apartment, my eyes glide through the room and stop at one of my more treasured books. It’s a simple softcover collection of my favorite photos from when I did a 365 project, way back in 2015. I haven’t opened the book for over a year now but this time, I decide to have a look.

I am not sure what I am looking for and frankly, I have been feeling quite uninspired lately. Perhaps I hope that this book will remind me about the time when I first started doing photography. Maybe it will spark something inside me that also sparked when all this was still new to me. I am not sure. As I browse through the pages of my little book I can’t help but feel a sense of accomplishment.

It’s a feeling that almost became unfamiliar to me. 'Why is that?', I ask myself, as my eyes now move to the life outside my window. I used to wander around my city for hours, looking for new photo opportunities. These days I just sit at my computer, working on whatever, and only pick up my camera when I have job to do. 'Well of course', I think, 'back then everything was still new. There is nothing there for me any more'.

Inspiration does not come on its own

It’s an unsettling thought, though when I’m being completely honest with myself, is just an excuse to not having to go outside and remain in the safe confinements of my home. I pause my thinking but now move my gaze to the camera on my shelf. There must be something I can do to get my inspiration back.

A couple of weeks went by, maybe even months, but nothing really changed. Until one day, I had enough of it. I can't wait for inspiration to happen when I don't actively stimulate myself as well. I also realized that, though I might have been to every place I know in my surroundings before, some things are bound to change. Relying on these things to provide some new inspiration, I grabbed my camera and headed out.

A new route with a tested method

As I walked out my door I went straight ahead, as opposed to turning left like I always do, and prepared myself mentally to search for something new. In my hand was my trusty Fujifilm camera with the XF35mm f2 screwed on securely. I always enjoyed shooting with a prime lens when I went out like this, as I found the limitations liberating. I also found various success with this lens before, so I had my fingers crossed again.

As I mentioned, the sun was particularly bright this day and somehow I decided to go out when the sun was at it’s highest point. Normally this isn’t such a good idea as my eyes are more drawn to the softer light at the end of the day. This time I decided to just roll with it as I was glad enough I went out already.

The bright sun and my urban environment provided me with a lot of shadows in the city and soon enough, my eyes started to be drawn to them. I always focused on photographing the city itself but at this moment, an alternate universe unfolded before my eyes. One that could only be seen when the circumstances where just right. I pointed my 35mm lens (it’s a 50mm equivalent, if you didn’t know that) at a window that’s encapsulated by a harsh shadow and took the shot. The window also casted it’s own reflection inside that shadow, which allowed for multiple dimensions to be displayed in this one shot.

How did that feel?

At that moment alone, I already felt good about my decision to just go out and provided me with good hope for the rest of my little photo walk.

I walked around for about an hour before I returned. I didn’t shoot all my photos on my FujiFilm as I also used  the 6mm lens on my iPhone to get the wider shots. When I got back home and waited for the photos to import into Lightroom, I had some time to reflect. What was it I learned from this experience? How could I use this to not feel uninspired in the future? It turned out that a lot of the liberation I was seeking was hiding in imposing limitations on myself. In this particular case, I could identify three major limitations. Any of those, or a combination of them, might help you as well.

The first realization I had was that revisiting the same place after a while again, isn’t a constraint but actually just another challenge. Perhaps even an advantage. If you are already familiar with a certain place, you are in a position to look past the initial characteristics of a scene and rather focus on the other things that aren’t that apparent at first sight. Every newbie will say 'oh it’s a house!' whereas you will now say 'look at that amazing shadow play around that window'.

At the same time, we can’t just assume every location will stay the same forever. A few days ago, I took a drive around the rural area just outside my city's border. It's an area I visited a few years ago but havent' returned since. I found it boring the first time and didn't bother thinking about it again. I always assumed there was nothing there for me to photograph but what do you know, the people there built a few new things there and suddenly an interesting composition emerged!

These things happen everywhere and they happen all the time. You don't even need to rely on other people to chance up the environment. The weather and the seasons alone can open up so many different dimensions that you can only start to recognize when you get familiar with a place.

Lastly, never have the arrogance to believe a place isn’t worthy of your time again if you disregarded it before. Your photography vision is constantly changing, hopefully, so where you might’ve not been able to see any subjects of interest before there might be something there for you this time around. I believe you should always try to educate yourself a little more. You might not learn things of much significance after a while anymore, but the congregation of this little things will make you a better photographer in the long run, trust me.

These buildings are surrounding a shopping area in the northern part of my town. It’s a boring area and the first time I visited, I quickly discarded it as being non-photogenic. When I returned a few years later, I suddenly was attracted to the shapes and the colors. Something I didn’t see before.

My photography style has changed quite a bit compared to when I first started out so even when my surroundings remained the same, my view of them has definitely changed.

Use a different focal length

The second realization I had recently is that a different focal length can change the way you view things a lot too. I purchased a vintage 80-200mm lens at the thrift store and mounted that to my Fuji X-T1 with an adaptor. The APSC-sensor on the Fujifilm camera’s allowed me to have a zoom range up to a 350mm equivalent lens, something I never shot with before. Even in my most uninspired time, when I took that thing out to shoot for the first time, a whole new world opened itself to me. I drastically had to recalibrate how I look at the world when I’m making photos and the challenge was just a whole lot of fun.

Tricks for giving yourself a new perspective

The same it also true for any other focal length you might not use regularly. Your brain automatically starts to see compositions once you get used to a certain focal length and sometimes, you just run out of ideas for compositions within that field of view (FoV). Mounting a lens to your camera that has a drastically different FoV forces you to rethink everything you thought you new and teach yourself a new way to look at the world around you. That means that if you are a wide angle guy, use that tele-lens for once and then see what you can come up with still. I think you’ll surprise yourself!

Go out with a specific goal

The final thing that opened my eyes on my walk is one that’s more of a mental exercise. You can force yourself to view your world differently quite easily when you use a different focal length. Internally trying to change your perspective is something that’s a little harder to do though. When I first noticed that harsh shadow around the window in my story, I got the idea to focus my attention on solely capturing shadows like that some time. You could do the same by searching for a specific color, for example, or only shooting moving subjects, people, animals, you name it.

A little preparation can go a long way

Setting a specific goal for yourself even before you go out to shoot, can liberate you from being trapped in the same thinking pattern. Instead, it forces you to look for other things you normally wouldn’t look for. Focusing on shooting shadows only, for example, is a great way to train your brain to see multiple options for a photo within a scene. You can come up with countless versions of this to force yourself to think outside of the box.

Do you always shoot in landscape orientation? Shoot in portrait orientation only! Do you like to shoot in black & white? Try to focus on the colors of the world! There are no rules but try to challenge yourself a little. I guarantee you will figure out how to produce something that’s worth it to keep.

If you have trouble coming up with a goal, just hit me up! Maybe I can point you in the right direction.

Next Rethinking my mobile photography workflow with iOS 14 and the Files app
Previous Struggling to keep photography simple in Ghent
Why I am walking, an introduction 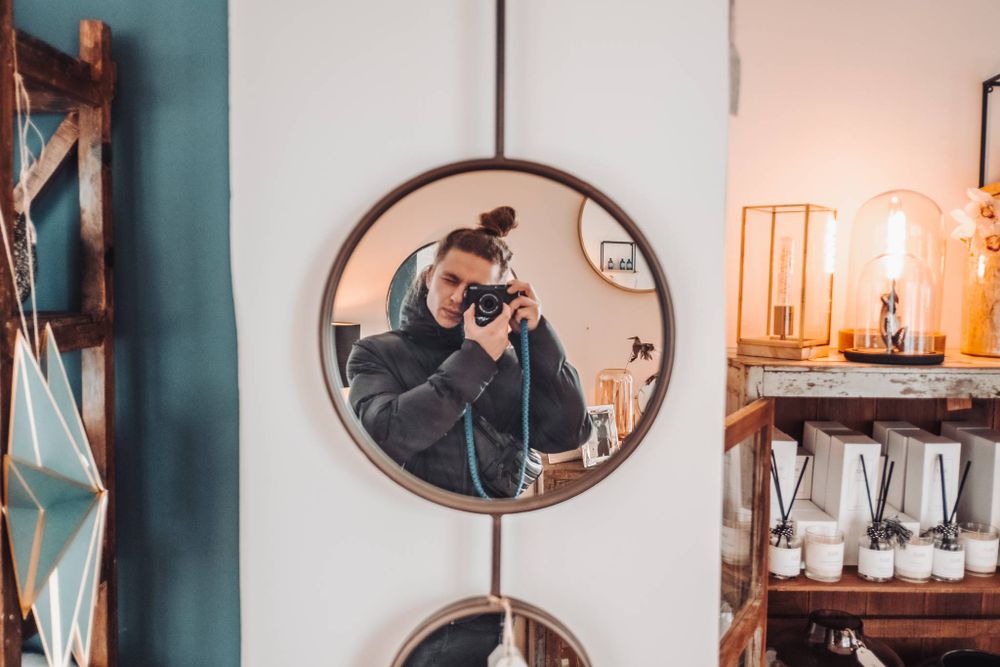